The OSD FIRST Robotics Competition team, the Olympia Robotics Federation (ORF, team #4450), made quite a showing at the FRC World Championships this week in St. Louis. They were soon labeled the “Rookie  Sensation from Olympia, Washington” by the game announcer. 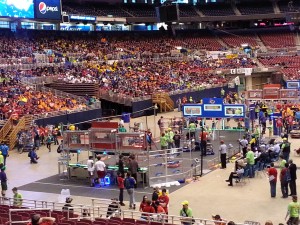 At the end of the first day, ORF was the only undefeated rookie team in their division, ranking 5th out of 100 of the best teams in the world.  Severely outgunned in two matches they used game strategy with their alliance partners to pull off statistically unlikely wins.  An impressive start that got them on everyone’s radar. 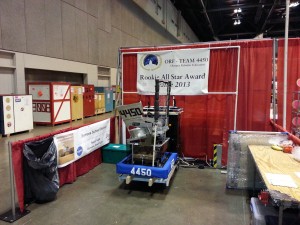 During the second day, ORF suffered major structural damaged during their 5th match, then limped through their 6th and final match of the day.  They ended the day 15th out of 100 teams in their division, and still the top ranked rookie team.  The robot was torn down to the frame Friday night and extensive repairs were undertaken that were not completed until two minutes before their final match Saturday morning. 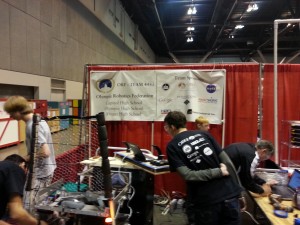 The repaired robot combined with more clever strategy and great operator performance to secure a final win over another alliance that clearly should have won on paper.  The team ended the qualifying matches 11th out of 100 teams in their division, and WON THE ARCHIMEDES TOP RANKED ROOKIE AWARD – the next best rookie was 20 places behind them in 31st place. 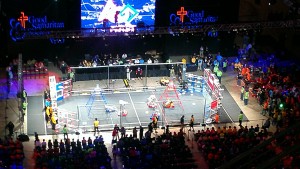 In the Elimination round, ORF became the captain of one of only 8 finalist alliances, earning them the right to choose two partners to join them in the finals.  In an exciting
and high scoring best-2-out-of-3 playoff round, the ORF alliance lost to the #1 seed alliance – ending their amazing run at the World Championships. 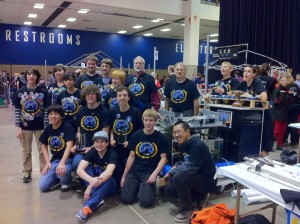 Congratulations to all the members of ORF for their outstanding, and literally world-class, accomplishment.