All Middle Schools in the Olympia School District are fielding Varsity Robotics Teams for this year’s international FIRST LEGO League (FLL) competition.  Just like varsity sports, these after-school teams are an opportunity for experienced students to take their Robotics, Science, Technology, Engineering and Math skills to the next level.  Reeves middle school has three FLL teams, while ORLA Jefferson, Marshall and Washington middle schools have two teams each.

Teams have worked hard on this year’s challenge, Nature’s Fury.  The teams are required to design, build and program autonomous robots to complete several time-sensitive Robot Game missions, as well as research, develop and present their Project solution to an engineering problem.  This video describes Nature’s Fury Robot Game, while this video shows a robot completing the missions from the previous year’s game (Body Forward).  The process for developing the research Project for Nature’s Fury is described in  this video. 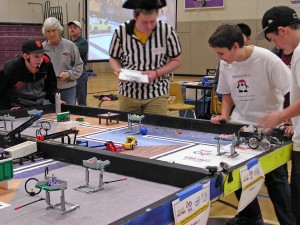 The schedule for both days is presented below:

Both Regional Qualifiers are being held at Spanaway Middle School:

If you have any questions, please contact your school’s FLL Teacher-Coach:

Come cheer on your favorite team as they strive to earn a spot at the Western Washington FLL Semi-finals.