It was a very busy weekend with 18 Olympia School District robotics teams competing in three different competitions.  All Middle Schools in the Olympia School District fielded Varsity Robotics Teams for this year’s international FIRST LEGO League (FLL) competition, with 11 teams entered into the 96 team, two-day, Regional Qualifiers.  Just like varsity sports, these after-school teams are an opportunity for experienced students to take their Robotics, Science, Technology, Engineering and Math skills to the next level.  Reeves middle school has three FLL teams, while ORLA Jefferson, Marshall and Washington middle schools have two teams each.  Three OSD teams won awards, and two of these teams earned berths at the Washington State FLL Semi-Finals (details below).

Also, this past weekend OSD hosted the FIRST Tech Challenge (FTC) South Washington Inter-League Championships at Jefferson Middle School.  The 17 teams from Thurston, Mason and Gray’s Harbor Counties in our Olympia FTC League were joined by teams from the Vancouver/Portland area to determine which teams advance to the State Washington State Championships.  OSD has seven FTC teams, with three from Olympia High School and two each from Avanti and Capital high schools.  Three OSD teams from two schools earned berths at the FTC State Championships (details below).

At the Spanaway FLL Regional Qualifiers, our OSD teams had their chance to demonstrate their hard work on this year’s challenge, Nature’s Fury.  The teams were required to design, build and program autonomous robots to complete several time-sensitive Robot Game missions, as well as research, develop and present their Project solution to an engineering problem.  This video describes Nature’s Fury Robot Game, while this video shows a robot completing the missions from the previous year’s game (Body Forward).  The process for developing the research Project for Nature’s Fury is described in  this video. 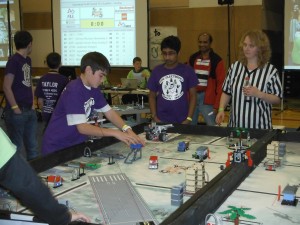 On Saturday, the Leg’ O Lords and Cubic Crusaders from Marshall Middle School, the Alpha Techno Pod and Destruction Pod from ORLA, and the Brick Bulldogs and Team Delta from Washington Middle School went up against 42 other teams at Spanaway Middle School.  The next day, the Electrons and Insert Name Here from Jefferson Middle School joined  the Sparkly Unicorn Ninjas, Team Waffles and Team Hypersonic from Reeves Middle School to go up against 43 other contenders.  All our teams performed very well. 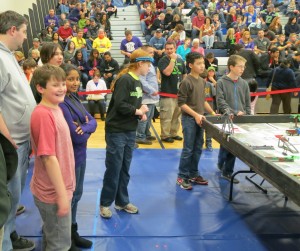 At the end of the weekend, OSD took home 3 awards:

In addition, both Jefferson teams earned berths at the FLL Western Washington State Semi-finals in Mill Creek on Sunday, February 9. Information on this event is available here.

Congratulations to all our FLL Varsity Robotics Teams and good luck to the Electrons and Insert Name Here in Mill Creek!!

Meanwhile this weekend, our high school FTC teams competed in this year’s FTC challenge, “Block Party” (see this video animation.) This is an exciting game which combines strategy and technical challenges for teams to sort out and prioritize as they design and build a Tetrix-based robot programmed in Robot-C to tackle this year’s game.  The robot must perform autonomously for the first part of the match, then under two-person remote control for the remainder of the two-and-a-half minute match.  The competition takes place in a 12 foot square arena with four robots operating simultaneously as two randomly selected alliances. 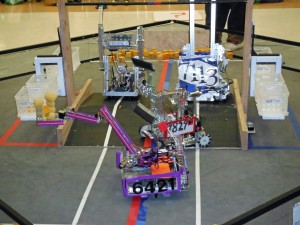 This season, OSD fielded seven FTC teams, with Avanti High School’s BGIP (team #4448) and MIP (#7111),  Capital High School’s Broken Motors (#7112) and Capital Gear Grinders (#5061) and Olympia High School’s team DERPA (#7113), Oly Cow (#6424) and One and Oly (#7973).  These seven teams, along with 10 others from Thurston, Mason and Gray’s Harbor Counties competed in a series of Olympia FTC League Events to determine their seeding going into the South Washington Championships.  Twelve teams from the Vancouver/Portland area complete the 29 team field for Saturday. 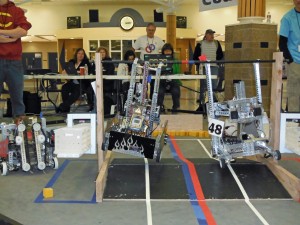 Teams spent the morning with Judge Interviews and preparing their robots for competition.  Around noon, six more qualifying rounds (44 matches) were held to settle on the final seeding of the mixed leagues for the Elimination Round.  Four teams would advance to the State Championships based on the Judged Awards and four more from the Elimination Round game play.  All the OSD teams did well in both the judging and qualifying matches, with two OSD teams, DERPA (#7113), BGIP (#4448) placing second and third respectively, thus earning them the right to be captains of one of four Elimination Round alliances.

By the time alliance selection was complete, two Olympia High School teams, DERPA (#7113) and Oly Cow (#6424), were members of the second seed alliance and both Avanti and Capital high schools, BGIP (#4448) and Capital Gear Grinders (#5061), were members of the the third seeded alliance.  Unfortunately, the second and third seeds play each other in the first round of elimination, so all the OSD teams were pitted against each other before the finals.  The Avanti/Capital allianace won the first match, but then the Olympia alliance rallied to win two in a row in the the best two-out-of-three Elimination Round.  The OHS alliance then went on the the finals, losing a high scoring pair of matches to the top seeded alliance.  However, DERPA (#7113), won a berth at the State Championships by captaining a finalist alliance team. 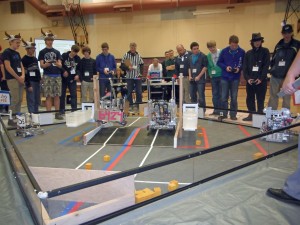 It then came down to the Judged Awards, and again OSD teams did very well.   Avanti High School’s  BGIP (#4448) was one of the Inpsire Award winners, recognized for their overall performance in all Judged categories and game play.  Olympia High School’s Oly Cow (#6424) team won the Think Award, recognizing their proven engineering prowess. Both these awards also earned these teams a berth at the State Championships.

Congratulations to all our FTC Robotics Teams for an excellent season, and good luck to our three State-bound teams, Avanti’s BGIP (#4448) and Olympia’s DERPA (#7113) and Oly Cow (#6424) as they prepare for the January 26 event at Issaquah High School.

The complete results from the FTC South Washington Inter-League Championships are presented below: