The Olympia Robotics Federation (ORF), OSD’s FIRST Robotics Competition (FRC) team, competed in their first Washington State Qualifier this past weekend.  The team, number 4450,  is tackling the 2014 FRC game, Aerial Assist (see this game animation), which was announced on Jan 4, 2014 – kicking off a 6 weeks Build Season for the team. The first Auburn Qualifier was held Thursday, February 27 through Friday, March 1 at Auburn Mountainview High School. 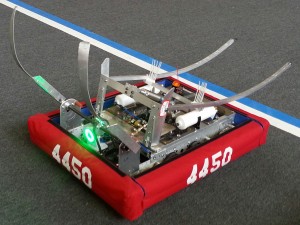 On Thursday evening the team worked through a few minor issues to pass all the required inspections and had time for a few rounds on the practice field.  Friday began the qualifying matches and ORF won 8 out 9 matches, ending the first day of competition in first place out of the field of 32 teams.  This raised a lot of eyebrows, given ORF is just in their sophomore year and only 1 of the 32 teams in attendance had less experience than ORF.  In fact, most other teams at the event had many more years, 2 to 5 times more members, and access to advanced fabrication technology. 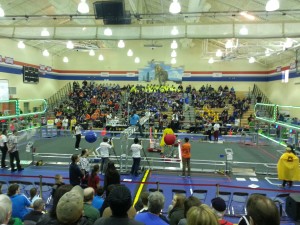 On Saturday, ORF played 5 more qualify matches and entered the elimination round in 3rd place.  As a top seeded team, ORF became captain of an alliance as they entered the best two-out-of-three playoff rounds.  The ORF alliance won their first match, but unfortunately lost the next two and their playoff run came to and end.  A complete summary of the scoring from ORF’s first competition is available on this site. 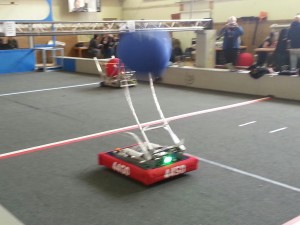 The team earned qualifying points for each victory at the event, and these point will be combined with those from their second Washington State Qualifier at the end of this month to determine if ORF qualifies for the Pacific Northwest District (PNW) Championships in Portland on April 10-12.  Currently, ORF is ranked well into the top 20% (5th) of the 32 teams in the PNW district which have played so far.  The weekly- updated PNW rankings are available on this site. 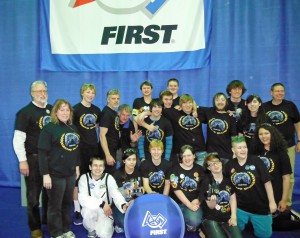 During the award ceremony, ORF won the coveted ‘Innovation in Control” award, sponsored by Rockwell Automation.  The judges were impressed with the sensor-based auto-shoot functionality that gave ORF with best record in autonomous scoring and consistent accuracy at hitting the high goal during teleop match play (see this game animation for an explanation of these terms).  The photo at left shows the team with their award after the competition. 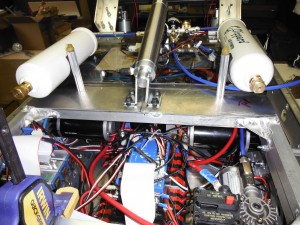 This successful first competition was the payoff for may long and hard hours of preparation during the 6 week build season which ended on February 18.  The team split into several working groups to tackle the challenge, putting to work the skills they developed during the off-season.  ORF is working with pneumatics for the first time (see photo at right) as part of their design solution. This video shows an early test of the revised ball pick-up system, while this video shows an early test of the pneumatically power ball launcher.  The team successfully integrated and tested all the systems by working through the 4 day Mid-Winter Break period.  This video contains a compilation of photos over the Build Season and videos of the completed robot, named Ibex. 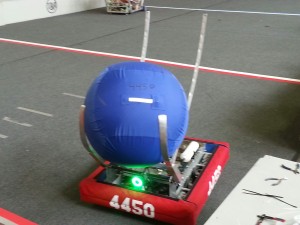 ORF will be competing in their second and final Washington State Qualifier on March 27-29 at Auburn High School.  Spectators are welcome and encourage to attend and cheer on ORF.  The team is beginning to plan for advancement to the Pacific Northwest District Championships in Portland, since their will be less than two weeks between their second qualifier and the PNW Championships.  If you, or someone you know, is interested in supporting/sponsoring the team, check out this STEM Pals Funding Need page.