All Olympia School District high schools competed in this year’s FIRST Tech Challenge (FTC) competition, “Block Party” (see this video animation.) This is an exciting game which combines strategy and technical challenges for teams to sort out and prioritize as they design and build a Tetrix-based robot programmed in Robot-C to tackle the  game.  The robot must perform autonomously for the first part of the match, then under two-person remote control for the remainder of the two-and-a-half minute match.  The competition takes place in a 12 foot square arena with four robots operating simultaneously as two randomly selected alliances. 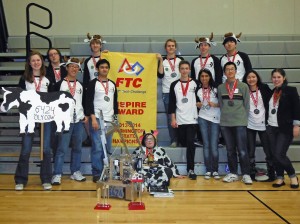 Three OSD teams from Olympia and Avanti high schools excelled at the FTC South Washington Championships and earned the right to compete in the FTC State Championships in Issaquah in January.  At “State”, one OSD team, Oly Cow (FTC Team# 6424), from Olympia High School advanced to earn a berth at the FTC Western U.S. Super-Regional, held this past week in Sacramento, CA.

The Best of the West: FTC Western Super-Regional

The FTC Western Super-Regional is a new level of FTC competition this year.  In prior years, each state was allowed to send two teams to the FTC World Championships.  Due to growth around the world, FTC divided the U.S. into 4 regions, with the 13 western-most states comprising the West Region.  The 72 best teams from these 13 state championships converged on Sacramento, California for this inaugural event. 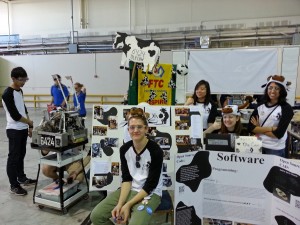 On the first day, Thursday, March 20, teams unpacked their robots, set up “the Pits”, and prepared their robots to pass the various required inspections.  After passing inspections, teams tested their robot functionality and took turns on the practice fields.  They also began scouting the other 35 teams assigned to their division, both as potential partners and adversaries, since teams are randomly assigned to alliances.  Oly Cow’s nearly 100% custom component design (they used very few kit parts) drew a lot of attention. 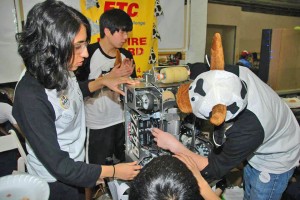 The second day, Friday, consisted of seven rounds of qualifying matches.  Oly Cow’s competition got off to a rough start when a system glitch caused the robot to go out of control.  Unfortunately, the glitch caused the robot to operate with motors running full power while facing into the wall, resulting in two damaged motors.  Despite a quick and efficient repair effort, the team was unable to completely reassemble all robot systems before being called for their next match and as a result they under-performed in their second match as well, resulting in a second loss.  It was clear that having two fully functioning robots and skilled drive teams was necessary to win at this level of competition. 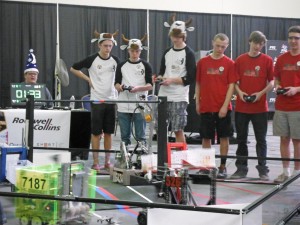 With a healthy robot, the rest of the day went much better for Oly Cow and the team won 4 out of their 5 remaining matches.  This placed the team in 15th place at the end of day one.  It also caused other teams to take notice as it became apparent Team# 6424 had one of the fastest and most efficient cube scoring system in the competition.  Oly Cow also began collaborating closely with a team from Portland (Team# 4855) and another from Snohomish (Team# 7817) which had complementary capabilities and had performed well when they had been alliance partners during previous matches. 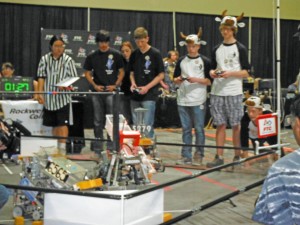 On the final day, Saturday, teams wrapped up the qualifying rounds with one more match for each team.  At the end of qualifying, Oly Cow ended up in the middle of the pack with their ranking, however, the Snohomish team was ranked #3, promoting them to become a captain of one of the 4 elimination round alliances.  During alliance selection, the Team# 7817 chose both Oly Cow and Team# 4855 from Portland as their divisional alliance partners.

This #3 seeded alliance handily won their semi-final round against the #2 alliance with two straight convincing wins in the best 2-out-of-3 round.  Unfortunately, the Oly Cow alliance lost to the #1 seeded alliance in the divisional final in what proved to be their final round. During the tournament award ceremony,  Team# 6424 members were award Divisional Finalist medals, which in turn qualified them for the FTC World Championships in St. Louis on April 23 to 26.

Preparing for the FTC World Championships

Oly Cow is a veteran team that formed as a club in 2012, since OHS did not yet have an advanced Robotics Engineering class.  This team met exclusively after school and on non-school days to work on their robot.  The team worked off-season, engineering a unique drive system and participating in community outreach events.  Oly Cow qualified for the State Championships based upon their winning the Think Award (for engineering design) at the South WA Championships.  The team subsequently won the Inpsire Award, FTC’s highest honor, at the Washington State FTC Championship.  After their most recent success at the FTC Western U.S. Super-Regional, the team is now focusing their year-long efforts on refining their robot for the highest rung of the FTC ladder, the World Championships.

Oly Cow is also working to find sponsors and supporters to help with their travel and competition expenses for the FTC World Championships in St. Louis.  If you, or someone you know, is interested in supporting OSD’s world-class FTC team, please go to this STEM Pals Funding Needs page.  Thank you!

Congratulation to all the Oly Cow team members and…..Go Cow!!!