It was an exciting and successful competition during the Southwest Washington FIRST LEGO League (FLL) Semifinal at Chinook Middle School in Lacey.   Three middle schools in OSD had qualified a total of four Varsity Robotics teams during this year’s international competition season.  Just like varsity sports, these after-school teams are an opportunity for experienced students to take their Robotics, Science, Technology, Engineering and Math skills to the next level.  Marshall Middle School and Washington Middle School each qualified a single team, while Jefferson Middle School was represented by two teams.  A the end of the day, OSD had two Award Winning teams and three teams earned berths at the  Washington State Championships (details below).

At the Lacey FLL Semifinal, our OSD teams had their chance to demonstrate their hard work on this year’s challenge, World Class.  The teams were required to design, build and program autonomous robots to complete several time-sensitive Robot Game missions, as well as research, develop and present their Project solution to an engineering problem.  This video describes World Class Robot Game, while this video shows a robot completing the missions from the previous year’s game (Body Forward).  The process for developing the research Project for World Class is described in  this video. 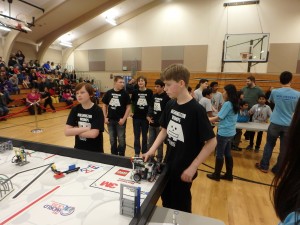 On Saturday, the Washington Wumps (team 5005) from Washington Middle School presented their research Project, demonstrated their teamwork and FLL Core Values (by solving a mystery challenge) and discussed the features of their Robot Design with three separate panels of judges.  While the team was in contention for a judged award, they did not secure the top spot among the 29 best teams in southwest Washington.  Unfortunately, during the afternoon Robot Game rounds, the Wumps did not score enough points to advance the State Championships based on robot performance.

BLT – Best Lego Team (team 5006) from Marshall Middle School impressed the judges, referees and other teams alike.  While they were in contention for an award, they did not secure the top spot in a judged category to win an award.  However, in the afternoon Robot Game rounds, BLT ended up in 5th place overall.  This strong robot performance combined with the impression made on the judges in the morning earned this Marshall team an advancement slot to the FLL State Championships.

The Jefferson Middle School teams had strong performances in both the morning judging and afternoon games.  The Jagwires (team 11388) was in contention in several award categories and took home the Programming Award for their solid code during the Robot Design Judging.  This award win (and nomination in other categories) combined with their mid-level performance in the robot games earned the Jagwires a berth at the FLL State Championship. 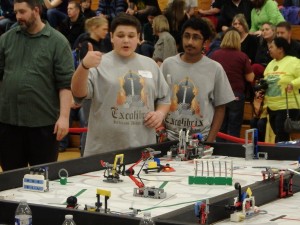 The second Jefferson team, the Excalibricks (team 11389) also had a strong showing in the judging sessions.  The team was nominated in several categories and won the Robot Design award during the technical judging session.  The team had a tense time during the afternoon robot games, struggling during the first two rounds with scores in the bottom quartile.  During the third and final round, the Excalibricks vindicated their Robot Design award by scoring 240 point and ending the robot game competition in 2nd place.  This great score combined with their award winning judging performance made the team an easy choice for advancement to the FLL State Championships. 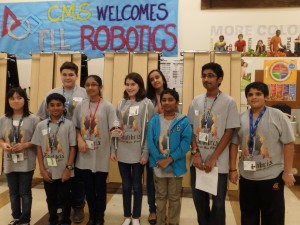 Congratulations to all our FLL Semifinalist teams for representing our school district so well throughout the entire season.   The three advancing teams now have two weeks to prepare for the Washington State FLL Championships on January 31 at the Showare Center in Kent, WA.  This venue will concurrently host the Washington State FTC Championships, where four OSD high school Varsity Robotics Teams will compete.  Admission is free and the public is welcome to come and cheer on our OSD teams in “Robotics as a Sport” in their quest to be best in Washington State.