OSD was extremely well represented at the combined FIRST LEGO League (FLL) and FIRST Tech Challenge (FTC) Washington State Championships at the ShoWare Center in Kent on January 31.   Two middle schools had qualified a total of three Varsity Robotics teams, while two high schools had qualified four teams. Just like varsity sports, these teams are an opportunity for experienced students to take their Robotics, Science, Technology, Engineering and Math skills to the next level. At the end of the day, OSD had an Award Winning FLL team, two award winning FTC teams and one FTC team headed to the Western U.S. FTC Super-Regional Championships (details below).

At the FLL State Championships, our OSD teams had their chance to demonstrate their hard work on this year’s challenge, World Class.  The teams were required to design, build and program autonomous robots to complete several time-sensitive Robot Game missions, as well as research, develop and present their Project solution to an engineering problem.  This video describes the World Class Robot Game, while this video shows a robot completing the missions from a previous year’s game (Body Forward).  The process for developing the research Project for World Class is described in  this video. 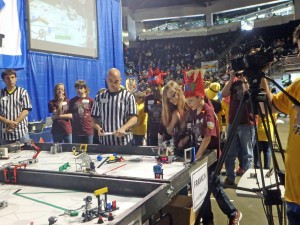 BLT – Best Lego Team (team 5006) from Marshall Middle School breezed through the FLL Qualifier in December earning the Gracious Profession Award, recognizing them as the team that best exemplified all the FIRST LEGO League Core Values.  At the Washington State FLL Semi-final competition, BLT ended up in 5th place in the Robot Game, thereby advancing to the State Championships.  The team presented their research project on Android security awareness to schoolmates and the Olympia Westside Rotary, prior to the Championships.  In Kent, the team placed 16th in the Robot Game among some of the competitors from the 575 FLL teams in Washington State. 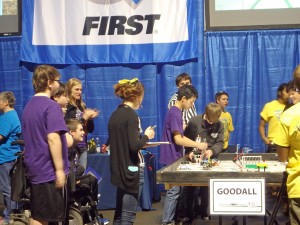 Jefferson Middle School advanced two teams to the ShoWare Center.  At the FLL Qualifier in December, the Jagwires (team 11388),  won the Mechanical Design Award for their solid robot chassis and clever attachments. This was followed by the team capturing the Programming Award at the FLL State Semifinals earlier in January.  The team shared the student learning app they created for the research project with schoolmates and OSPI prior to the State Championships.  In Kent,  the Jagwires ended up in the top two-thirds of the 30 competing teams to bring an exciting end to their very successful season. 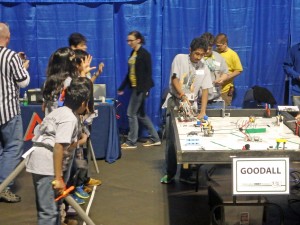 The second Jefferson team, the Excalibricks (team 11389) made a statement early in the season by taking home the coveted overall Champion Award during the FLL Qualifier in December. At the FLL Semi-final, the team was nominated in several categories and won the Robot Design award during the technical judging session. At the State Championships, the Excalibricks scored their season-high 320 points in the Robot Game, placing them in the top quartile at the Championships with a 7th place finish. 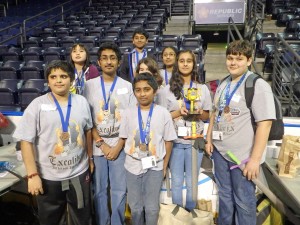 But the team wasn’t finished there.  After sharing the student-led math learning app they developed for the research project with schoolmates and OSPI, the team presented this example of World Class learning to the State FLL judges.  The judges we impressed with the team’s work and the Excalibricks were awarded the Research Award by the judges.  This represents the fourth year in a row where a Jefferson FLL team has brought home a trophy from the FLL State Championships.  The team will now share their success with the Thurston County Chamber of Commerce later this month.

Congratulations to the Excalibricks and all the OSD FLL teams for another outstanding season.

The OSD High School Varsity Robotics Teams competed in this year’s FTC challenge, “Cascade Effect” (see this video animation.) This is an exciting game which combines strategy and technical challenges for teams to sort out and prioritize as they design and build a Tetrix-based robot programmed in Robot-C to tackle this year’s game.  The robot must perform autonomously for the first part of the match, then under two-person remote control for the remainder of the two-and-a-half minute match.  The competition takes place in a 12 foot square arena with four robots operating simultaneously as two randomly selected alliances. 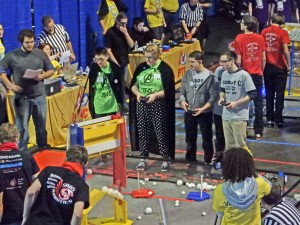 All eight Olympia School District FTC teams competed in the Southwest Washington FIRST Tech Challenge (FTC) Inter-League Championships on Saturday, January 10, at Wilson High School in Tacoma.  The fifteen teams from the Olympia League (high school teams from Olympia, Lacey, Tumwater and Shelton) competed with teams from the Centralia and Vancouver leagues to earn some of the eight available slots to the Washington State FTC Championships.  Every OSD school earned an award and four teams earned berths to State Championships held this past weekend at the ShoWare Center in Kent. 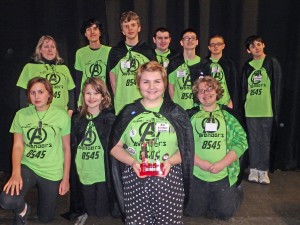 The Avanti Avengers (#8545) got off to a strong start, consistently ranking among the top 5 teams through most of the qualifying rounds in Kent.  Unfortunately, two tough loss at the end of the qualifying matches ended up keeping the Avengers just out of the playoff round.  However, the Avanti Avengers conducted over 20 community STEM outreach projects over the last year, including a robotics summer camp for middle schoolers, workshops for newer/smaller FTC teams in the Olympia area, and the Lacey STEM Fair.  This year-round commitment to STEM education impressed the judges and earned the Avanti Avengers the FTC State Connect Award for community outreach.  Congratulations to Avanti, OSD’s original FTC school, for another award winning performance at the State Championships. 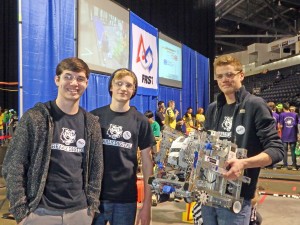 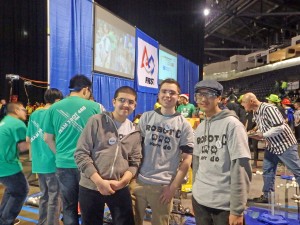 Robot C Robot Do had their best performance of the year at the ShoWare Center, going undefeated through all but the very last round of the 48 qualifying matches.  Although there were only two undefeated teams, due to the FTC tie-breaker system, the team ended up in 5th place overall at the end of qualifying – just one spot short of becoming an alliance captain in the the playoff round.  However, Robot C Robot Do’s performance did not go unnoticed by the other teams, and they were quickly snapped up as the first round draft choice by the #3 seeded alliance.  Unfortunately, during the best-two-out-of-three semi-final playoff round, Robot C Robot Do’s alliance lost out to the #2 seeded alliance, ending the team’s impressive run at the FTC State Championships.

Oly Cow struggled with technical issues throughout the qualifying rounds.  Fortunately, they got back on track by the last qualifying match and their robot’s high scoring performance caught the attention of the #1 seeded alliance captain, and they selected Oly Cow as one of their playoff round partners.  Their playoff semifinal round went all the they to a tie-breaking match, but the alliance fell just a few points short of advancing to the FTC State Finals. 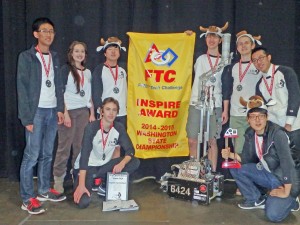 Oly Cow earned a berth at these Championships by winning the coveted Inspire Award as the best overall team in Southwest Washington.  Their technical excellence, high-end engineering and recognized leadership was again apparent to the judges at State, as Oly Cow closed-out the FTC State Championships Award Ceremony by repeating as the Inspire Award winner for the entire state of Washington.  This award earns Oly Cow a slot for a return trip to the Western U.S. FTC Super-Regional in California in March.

Congratulations to all our FTC Varsity Robotics teams for another award winning season, and Good Luck to Oly Cow as they take the next step in their attempt to repeat their journey to the FTC World Championships in April.