All Olympia School District high schools competed in this year’s FIRST Tech Challenge (FTC) competition, “Cascade Effect” (see this video animation). This is an exciting game which combines strategy and technical challenges for teams to sort out and prioritize as they design and build a Tetrix-based robot programmed in Robot-C to tackle the game.  The robot must perform autonomously for the first part of the match, then under two-person remote control for the remainder of the two-and-a-half minute match.  The competition takes place in a 12 foot square arena with four robots operating simultaneously as two randomly selected alliances.

Three OSD teams from Olympia and Avanti high schools excelled at the FTC South Washington Championships and earned the right to compete in the FTC State Championships at the ShoWare Center in January.  At “State”, one OSD team, Oly Cow (FTC Team# 6424), from Olympia High School advanced to earn a berth at the FTC Western U.S. Super-Regional, held this past week in Oakland, CA.

The Best of the West: FTC Western Super-Regional

The FTC Western Super Regional brought together the 72 best teams from 13 western states.  On the first day, Friday, March 27, teams unpacked their robots, set up “the Pits”, and prepared their robots to pass the various required inspections.  After passing inspections, teams tested their robot functionality and took turns on the practice fields.  They also began scouting the other 35 teams assigned to their division, both as potential partners and adversaries, since teams are randomly assigned to alliances.  Oly Cow’s 100% CAD (Computer Aided Design) model and custom component design (they used very few kit parts) drew a lot of attention from participants and judges alike.  They team also had they opportunity to present their extensive design process, strategies, outreach and engineering skills to a panel of FTC judges.

The second day, Saturday, consisted of seven rounds of qualifying matches.  Oly Cow’s competition got off to a rough start, losing their first match.  However, after winning the next two matches, the entered the lunch break in 12th place.  Their afternoon matches were a split.  They won the first last matches in convincing manner, but dropped the middle two to other highly ranked teams.  The team ended Saturday with a 4-3 record and ranked 13th among the 36 teams in their division. 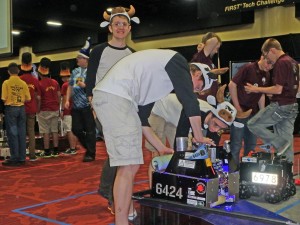 On the final day, Sunday, teams wrapped up the qualifying rounds with two more matches each.  During the first of Oly Cow’s two matches (against one of the undefeated teams), their robot developed a problem with its ball handling mechanism and they lost the high scoring match.  With the short time interval until their second match, the team was not able to fully repair their robot and they unfortunately also lost their second and last qualifying match.

At the end of qualifying, Oly Cow ended up in the middle of the pack, with their rank dropping to 19th out of the 36 teams in their division.  During alliance selection for the playoffs, Oly Cow was not selected by the four alliance captains, thus ending their game play at the FTC West Super Regional.  This represented just the first time in the team’s 3 year history (10+ competitions) that Oly Cow did not make it to the playoff round of an event in which they participated.

Congratulations to the amazing students from Oly Cow for setting the standard for FTC excellence in OSD for three years now.  All the members of this award winning team are seniors, so the legacy they have established for Olympia High School Robotics will set the bar high for future members of FTC Team #6424.