Twenty four STEM Robotics teams from nine school districts converged on Jefferson Middle for the South Sound STEM Robotics Invitational on Monday, June 1.  This annual event takes challenges from OSD’s STEM Robotics 101 curriculum and is open to schools using this free online resource. This was the sixth installment of this end-of-year STEM Robotics competition, which began with four OSD schools in 2010 and has grown over 50% a year since then (including cloned versions of the competition in Centralia and Camas).  Over 100 student designed/built/programmed robots competed in this year’s competition. 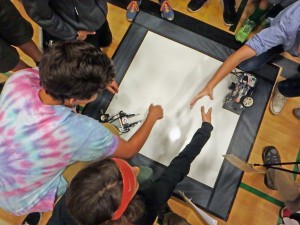 Teams from elementary through high school competed head-to-head in three events; Robo-Dragsters, Cube Wranglers and Sumo-Bots.  First and second place awards were presented for top performers in each event, as well as overall School Champions in the Rookie (less than one semester of STEM Robotics) and Veteran Divisions.  Tremendous sportsmanship was demonstrated by all participants, from helping each other in “the Pits” to congratulating each other on the competition fields.

In the Robo-Dragsters, robots must start upon detecting the movement of the starting flag, race straight and fast to the finish line, and stop as a result of sensing the dark finish line.  Several races were determined by 1/30 of second with instant-replay photo-finishes. The Olympia Regional Learning Academy (ORLA) took first place over Tumwater Middle School in the Rookie Division, while two teams from Washington Middle School battled for the top spots in the Veteran Division. 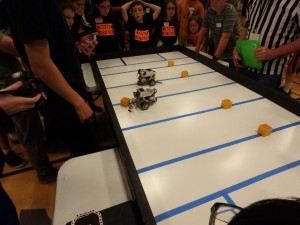 The Cube Wrangler was a new event added this year to increase the complexity and strategy elements of the competition.  Robots had to gather yellow 2-inch cubes and return them their scoring zone, with the highest valued cube placed in the center of the field and accessible to both robots. Nisqually Middle School placed first, just beating out Washington Elementary in the Rookie Division, while Washington Middle School edged out Aspire Middle School in the Veteran Division. 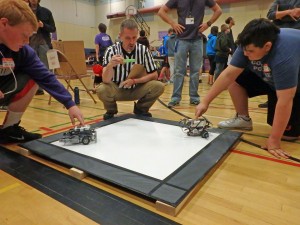 In the Sumo-Bots, opposing robots attempt to push each other out of a 3-foot square arena.  Teams must design, build and program a robot which keeps itself in the white arena while attempting to push its opponent entirely onto the the black border.  If one robot becomes unable to move while the other still can, the mobile robot is declared the winner.  Tumwater Middle School nudged out Washington Elementary in the Rookie Division, while Washington Middle school dominated the Veteran Division with their two teams going head to head in the finals. 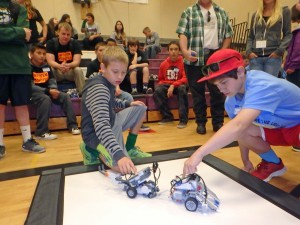 All the events are run as double elimination tournaments, so each team competes at least twice in the contest.  Each school is allowed up to two entries in each of the three events – so most schools ran their own local competition to determine their top-two entries, with only the best of the best making the trip to the Invitational.  At the event, teams are awarded points for all finishes 9th place and above, including ties, to determine the overall school champions.  As can be seen in the detailed team results at the bottom of this page, the competition was extremely close with ties for sixth place and many third, fourth and fifth place finishes determined by only one point. 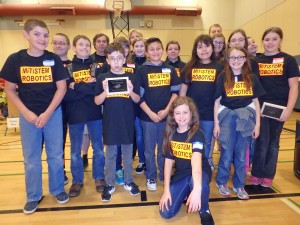 In the Rookie Division, Washington Elementary School was awarded the School Champion Award for their consistently strong performance cross all events, while Tumwater Middle School placed second and a third-place tie was split between White Pass Junior High School and Nisqually Middle School. 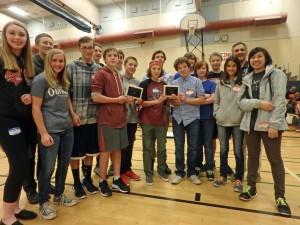 In the Veteran Division, there was little surprise when Washington Middle took home the School Champion Award after winning five of the six individual event awards. The remaining teams were extremely close with Chinook Middle School and Marshall Middle School ultimately placing second and third respectively.

Congratulations again to all our participants and award winners.